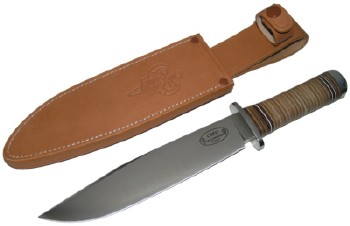 Fallkniven NL2 Odin Northern Light Series.
Together with Thor, the one-eyed Odin (or Woden) is considered the highest ranking god in the Norse sagas. He was the father of the gods and of mankind, riding on his eight-legged horse Sleipner. Accompanied by his bearers of knowledge, the two ravens Hugin and Munin, he was the undisputed ruler of Valhalla. NL2 Odin is a powerful adaptable knife with its blade in our laminated VG10 steel. The striking action is excellent and the knife does not feel the least clumsy. When it comes to the Northern Light Series nothing has been spared to make the knife as strong, beautiful and comfortable as possible. The knife is a pleasure to look at and a thrill to use.
The blade is made out of laminated VG10 steel, where the edge is made of now renowned VG10 steel and the sides consist of tough, all-stainless 420J2 steel. This combination is good since it brings together all conceivable and desirable properties such as resilience, resistance to torque and edge-durability in a single blade. A 6.5 mm thick blade in itself would be strong enough for most tasks - with laminate technology one can expect an additional 20% strength in the form of resistance to bending, as compared to an ordinary VG10 blade.
The handle consists of specially selected oxhide: sadly a material that is usually overlooked by manufacturers, but which gives a sure and rugged grip. It ages beautifully and as the years pass it acquires an attractive brown patina, and it is unaffected by oil and solvents and impervious to water. Dryness might cause small cracks on the handle but they disappear when the knife is put to use again.

Fallkniven is persisting with the convex edge, since they consider this to be the ultimate combination of cutting performance and edge strength, and of course the NL2 Odin knife features this. Anyone who knows anything about knife making knows that such an edge can only be made by hand, and that’s why 99.99% of all knives don’t have that kind of edge. Knives in general are of course mass produced, where CNC (Computer Numerically Controlled) robots and grinders shape the blades as best they can. The machines are loaded with stacks of blades so that production can go on 24 hours a day and the result is quite often really good – good knives at affordable quotes. However, if you want top-drawer strength, corrosion-resistance, edge durability and design, the machine hasn’t been made that can come even close to the craftsmanship of a trained, skilled knifesmith. Therefore, they take great pride in being able to present our Northern Light Series, well aware that only the most quality-conscious will appreciate its assets.