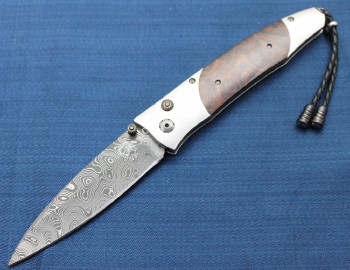 The Gentac ‘Outback’ features a light and resilient frame in aerospace grade titanium, inlaid with desert ironwood (one of the hardest woods on Earth). The blade is stainless 'Boomerang' damascus steel by Chad Nichols. The one-hand button lock and the thumb stud are set with spinel gem stones.
An exceptional design that offers rigorous performance in a sleek, comfortable knife, the Gentac is also the perfect canvas to showcase William Henry’s range of exotic materials and techniques.
The ‘Outback’ features the craftsmanship, hi-tech, and forged metals that are the hallmark of William Henry's collections; a distinctive personality statement to be worn and used for a lifetime.

All William Henry knives feature a unique serial number which is engraved into the blade to assure the authenticity and lifetime traceability of the product.

--Damascus steel was a term used by several Western cultures from the Medieval period onward to describe a type of steel created in India and used in swordmaking from about 300 BC to 1700 AD. These swords were characterized by distinctive patterns of banding and mottling reminiscent of flowing water. Such blades were reputed to be not only tough and resistant to shattering, but capable of being honed to a sharp and resilient edge. William Henry's damascus is made is made from several types of steel welded together to form a billet.
The patterns vary depending on how the damascus artist works the billet. The billet is drawn out and folded until the desired number of layers are formed. William Henry damascus billets are forged with a minimum of 300 layers. William Henry works with a handful of the very best damascus artists/forgers in the U.S.

--Titanium is a low density, strong, lustrous, corrosion-resistant (including sea water, aqua regia and chlorine) metal with a silver color.
It was discovered in Great Britain by William Gregor in 1791, and named by Martin Heinrich Klaproth for the Titans of Greek mythology

William Henry uses only aerospace-grade titanium alloy for our frames, clips, and micro-fasteners. Called 6Al/4V, it is titanium with a little aluminum and vanadium added in for additional toughness and tensile strength.

--Our Desert Ironwood is sourced responsibly from Arizona and Northern Mexico, from the lower reaches of the Sonoran desert. It is very hard, very dense, and is one of a handful of woods that sinks in water. Ironwood also features some of the highest contrast and striking patterns of any wood in the world. Once used by the Seri Native Americans of Mexico for tool handles, we proudly offer premium grade ironwood on a variety of William Henry tools.

--Natural spinel is a gemstone that has become a great favorite with gem dealers and gem collectors; one might even say that spinel is for gemstone connoisseurs only.
It is a hard glassy mineral occurring as octahedral crystals of variable color and consisting chiefly of magnesium and aluminum oxides. Some spinels are among the most famous gemstones in the world: among them are the Black Prince's Ruby and the "Timur ruby" in the British Crown Jewels, and the "Côte de Bretagne", formerly from the French Crown jewels.